I want to tell you about something we recently did at Penn – and which you can all do as well. Every fall, Penn has an activities fair, at which around 300 groups set up booths on Locust Walk (the main college thoroughfare) and thousands of people walk by, looking for things in which to get involved. There are political groups, fraternities, sports teams, performing arts groups, and religious groups – including your classic kiruv organizations. So I set up a table on Locust Walk (I registered too late, but they let me bring my own table) and I made it look like a Shabbat table – a nice white tablecloth, two silver candlesticks and lit candles, a challah board + 2 challot + a challah cover, a silver kiddush cup filled with grape juice, and little shot glasses of grape juice alongside it, and a plate of rugelach. At the foot of the table I had a big sign that said “HELLO! MY NAME IS SHABBAT”, kinduv like a big nametag. Then I stood there, smiled, and waited.

And people came over – hundreds of people, mostly people I’ve never seen before. They would pass by, see the table, smile, see me smiling, walk over and we’d start talking. They’d ask what this was, and I’d say “It’s a Shabbat table”. Curious, they’d ask what my group was, and I’d say “It’s just a bunch of students inviting other students for Shabbat means – old friends and new friends, like you!”. Excited, some of them would ask how this is different then Hillel, as they went there once, or were thinking of maybe going there, and I’d say “I love Hillel and go there sometimes but it could be a little overwhelming. This is just a bunch of students in a more intimate, friendly atmosphere, sharing Shabbat for free on different places around campus – in the Quad, campus apartment, off-campus houses, etc.” Then I’d say that if they wanted to get invited to meals, or find out more, they could sign up (I had a pad of paper and a pen). 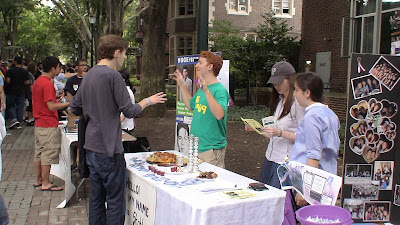 In about four hours, I got over 115 people to sign, probably >90 of whom were not observant (and only 3 non-Jews). Most were freshmen, some of them were upperclassman; one guy said he was a senior, Jewish, never been to Shabbat before in college but thought this was the best idea ever and wants to come. We also had magnets which say “Wanna join us for a free, student-led Shabbat Dinner? Email us at freeshabbatdinners@gmail.com” (that email address forwards to me) and we gave out nearly 200 magnets. Now we just have to invite these people to mealsÂ  – which are easy, free, and numerous people in Orthodox Community at Penn have already told me they’d love to help.

The whole thing (not counting the magnets) cost around $25 – which is almost nothing! And 4 hours of smiling, which actually made my week, and went by way too fast. I don’t know what your colleges have and how you could adapt this, but if you could, you really should. It’s such a great way to meet people and invite them to meals – and it’s not weird/proselytizing/intrusive at all – people will come to you if you’re friendly and welcoming.

If you need any help or want to find out more, don’t hesitate to ask!